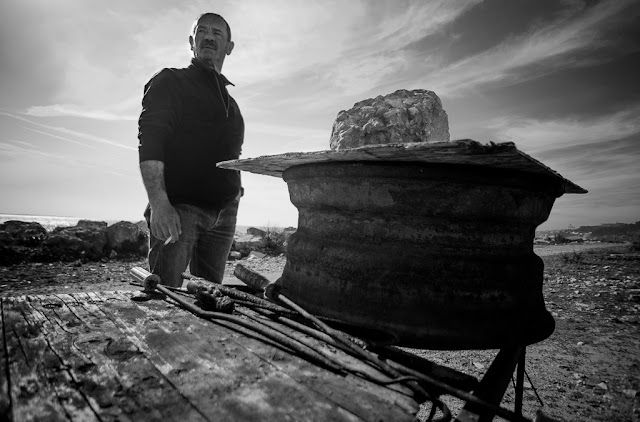 (Dafundo, Lisbon Coast) João tells me that sometimes things get stolen in here - mostly iron for the scrapheap, but also flatware, cups, and dishes kept under the fishermen's boats covers for festive gatherings. He raises the tip of one of the covers to reveal the boat’s contents and parades some extraordinary fishing lures, holding them between his thumb and a forefinger once cut short by a mishap with a fishing hook. He then walks towards the truck wheel rim the locals use to grill food and points at it with the cigarette locked between the fingers. 'They once tried to steal this,' he says not without pride, 'but were unable to carry it.'

It's hard to believe that this strange place used to be one of the trendiest beaches of Lisbon, but you know what they say: photographs - at least those taken 100 years ago - don't lie.
Email ThisBlogThis!Share to TwitterShare to FacebookShare to Pinterest