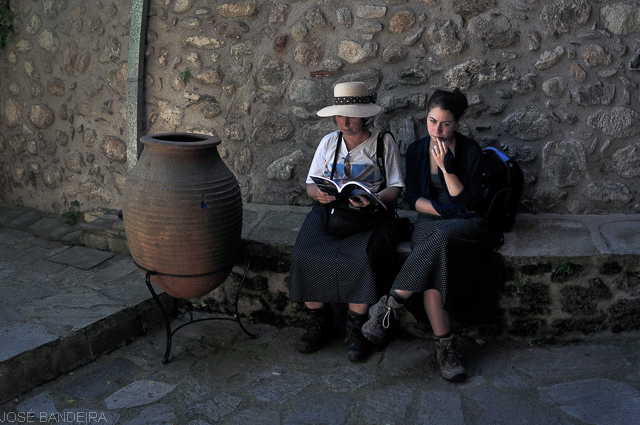 At the entrance of a monastery at Meteora, Greece, two British women (the older lady’s t-shirt is a give-away), presumably mother and daughter, avidly look up their copy of Baedeker, the Lonely Planet of the 19th century. Well, not both of them; the young woman wears a lovely melancholy on her face that a less insightful observer could mistake for boredom. She looks distant, doesn’t she? Maybe she’s thinking about some Dragoon that hasn’t been writing to her as often as he should (remember, we’re in the late 19th century, the age of Romanticism.) The anachronic atmosphere is reinforced by the fact that both women are wearing skirts, a rare outfit among tourists, and that the skirts are exactly alike. In fact, they're cloths furnished by the nuns to cover the ladies pants or even, Heaven forbids, their naked legs and shorts. Not fashion, you see, but pious modesty.
Email ThisBlogThis!Share to TwitterShare to FacebookShare to Pinterest