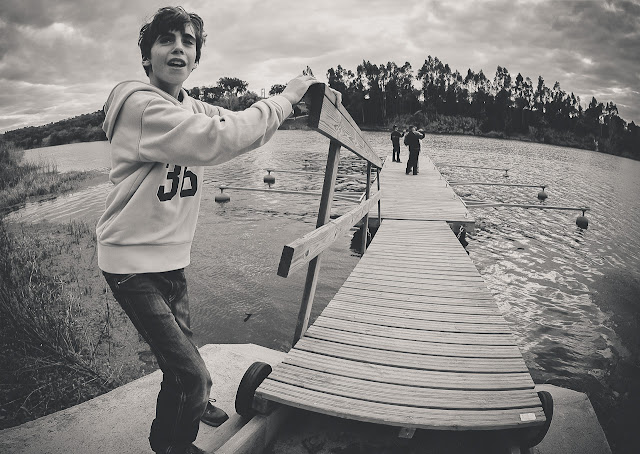 ‘Dad,’ Daniel said, ‘it’s moving!’ He had been up and down investigating the mechanics of the thing and had pushed the pier bridge a meter or so. ‘No brake shoes,’ I remember thinking, ‘how odd.’ But hey, I’m not an engineer, so what did I know. The people at the pier were taking photographs, unaware of my son’s scientific inquiries. ‘Dad, it’s MOVING,’ he insisted, laughing nervously. I told him ‘Son, I’m taking photographs. Please wait until I’m finished.’ Kids are always rushing things. Eventually, one of the men on the river noticed the movement of the pier and started running up, crying like a madman. The others followed him and were able to put the brake shoes behind the wheels. This is wild guess, for at the time I had finished taking photographs I was half a kilometer away.

Addendum: I had lunch with Daniel today and asked him to forgive me for having been such a clown as an educator. After all, I’m a humorist: I earn my living mostly by drawing and writing very silly things disguised as deep truths about Man and the Universe (or was it the other way around?)
I added that it is highly unlikely that I change in the future. Not after 50, I won’t. He said he was glad we have always been such good ‘accomplices.’ He wasn’t using the wrong word. But I can assure the ethical reader that no human being, irrational animal, or plant was ever hurt in the course of my fatherhood.
Email ThisBlogThis!Share to TwitterShare to FacebookShare to Pinterest